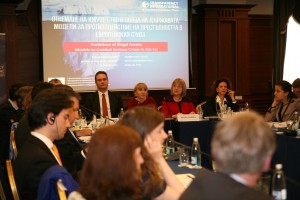 On April 28th 2015, in Sofia, Bulgaria, an international conference “Forfeiture of Illegal Assets: Models to Combat Serious Crime in the EU” took place. The event was hosted by the national chapter for Bulgaria of the international movement for fight against corruption Transparency International.

The conference was opened by the President of the National Assembly of Bulgaria, Ms. Tsetska Tsacheva. Among other official guests and speakers were also Mr. Ognyan Minchev, President of the Board of TI – Bulgaria, Mr. Plamen Georgiev, President of the Commission for Illegal Asset Forfeiture and Ms. Anne Koch, Regional director for Europe and Central Asia of Transparency International Secretariat in Berlin.

The afternoon session of the event was dedicated to the non-conviction based confiscation model in Bulgaria. The Bulgarian approach, as well as proposals for changes in the existing legislation, were discussed.

The conference is the closing event of the two-year project “Enhancing Integrity and Effectiveness of Illegal Asset Confiscation – European Approaches” of Transparency International – Bulgaria, which is realised in partnership with the national chapters of Transparency International in Romania and Italy. The initiative is co-financed by the “Prevention of and Fight against Crime” programme carried out by DG Home Affairs of the European Commission.

ASSET RECOVERY IN THE UK – RECOGNISING STRENGTHS AND WEAKNESSES

“PLUCK-THEM” LEGISLATION: CONFISCATION OF ILLEGAL ASSETS IN THE NETHERLANDS

CONFISCATION OF PROCEEDS OF CRIME IN GERMANY

ASSET RECOVERY IN ITALY: A LOT OF EXPERIENCE BUT A LOT TO IMPROVE

IDEAL MODEL FOR ILLEGAL ASSET FORFEITURE: WHERE WE ARE. COMPARATIVE STUDY OF THE MODELS OF BULGARIA, ITALY, AND ROMANIA (in Bulgarian language)