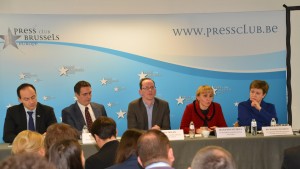 The event was organised by the national chapters of Transparency International in Bulgaria, Italy and Romania and was dedicated to the topic of confiscation and forfeiture of criminal and illegal assets as a tool for fight against serious crime.

During the event a Policy paper elaborated by Transparency International chapters with the “Ideal national model” for confiscation/forfeiture of assets, was presented by Ms. Diana Kovatcheva, former Minister of Justice for Bulgaria. The model is based on the principles of transparency, efficiency and protection of human rights and contains all the advantages of existing national models, which have proven their efficiency, and tend to avoid their weak points.

In her presentation Ms. Kovatcheva said that the confiscation/forfeiture of criminal or illegal assets is considered as a very effective way to fight organised crime, which is essentially profit-driven. She stressed on the fact that “the existing EU model takes account of the peculiarities of the models for confiscation of proceeds of crime (criminal assets). However, it almost entirely ignores the models based on the concept of illegal asset forfeiture, and the so called non-conviction based confiscation, since they do not require a link between a specific crime and assets deriving from it”.

“The issue of confiscation of assets acquired through criminal activity is directly linked to the viability of the EU”, said Commissioner Georgieva. “The existence of organized crime and corruption affects fundamental European values. Corruption deprives our societies of billions of euros each year and hinders the competitiveness of the economy. The best way to solve this issue is aggressive policy of seizing property acquired through criminal activity”, Ms. Georgieva said.

MEP Andrey Kovatchev said that the lack of justice feeds populism. “This is why stronger common European rules for confiscation of illegal assets and more efficient judicial cooperation at EU level are needed. Each and every lost or stolen euro represents a missed opportunity for more jobs and stronger economics”, Mr. Kovatchev pointed out.

Transparency International suggested elaboration of common standards at EU level aiming at improvement of the tracing, seizure, confiscation and management of assets, subject to confiscation at national level. This is especially needed as far as the European cooperation is concerned in cases of transnational crimes and of assets that are located outside the boundaries of the confiscating state.

The event was used as an opportunity for Transparency International Bulgaria, Romania and Italy to present a Comparative report including summaries of the three national models of confiscation/forfeiture of illegal and criminal assets, as well as the findings from the monitoring of the activities of the national confiscation/forfeiture authorities in the three countries, being also Member States of the EU.